Will the Czech Republic be “Fit for 55”?

Will the Czech Republic be “Fit for 55”?

The October elections in the Czech Republic could change the Czech government’s approach towards the EU’s climate objectives, which is currently very cautious. Similar to most countries in Central & Eastern Europe (CEE), the country is an underachiever in renewables, but it is gradually phasing out coal-fuelled power plants. Meeting the EU’s 2030 targets will be a huge challenge for Czechia, and the current government sees no alternative to nuclear energy to achieve the 55% emissions reduction goal.

In April, EU member state leaders agreed to step up their climate ambitions and accelerate the reduction of greenhouse gas (GHG) emissions. They approved a European Commission plan to cut emissions by 55% until 2030, compared to 1990 levels. The goal is more ambitious than the previous plan of a 40% cut and is binding for all member countries. Details of how to achieve this goal will be revealed by the European Commission (EC) in mid-July. The plan is expected to revamp the EU carbon market, establish tougher CO2 standards for cars, or even introduce a border tariff to impose CO2 costs on imports of polluting goods.

The Czech Republic and other CEE states have stressed from the beginning that the move to clean energy would bring large social, environmental and economic costs. Prague backed the 2030 target provided that the objective applies collectively to the whole EU and not only to countries individually. State secretary for European affairs Milena Hrdinková said that EU support for nuclear expansion in Czechia will be crucial, calling on the EC to clear planned state aid for the construction of a new nuclear reactor in Dukovany. According to industrial minister Karel Havlíček, Czech Republic “has no other choice than nuclear energy” in order to meet EU climate goals.

A study by McKinsey reveals that the country is the 4th largest emitter of GHG per capita in the EU, while the power sector contributes 35% of the total amount, followed by industry, transport, buildings, agriculture, and waste. The analysis shows that achieving the EU goal by 2030 would require additional investments of EUR 19.5 billion, corresponding to an estimated 1% of GDP, over this decade.

Czechs should receive nearly EUR 37 billion in total in EU subsidies to transform their economy by 2030, while more than 30% of this should be allocated to mitigating climate change. The Modernization Fund, which gets money from auctioning emission allowances under the EU’s Emissions Trading System (ETS), can distribute approximately EUR 9.79 billion or even more until 2030, depending on the price of these permits. The fund will begin to distribute ample amounts of the total this year and the demand is huge. Companies have already applied for more than the EUR 37 billion available for their green projects. The Ministry of Environment estimates that the fund can contribute up to 40% of the country’s predicted emission reductions by the end of the decade. Another substantial support will come from the Just Transition Fund for poorer EU members.

In order to meet the 2030 target, a further reduction in the country’s reliance on coal for power and heat and reduced mining are crucial. This is already underway as several plants have shut down and others are scheduled to do so. The Industrial Ministry and the Coal Commission have already agreed that the country should phase out coal by 2038, but environment minister Richard Brabec admits it should happen much sooner. For two reasons: first, the new EU Emissions Trading Scheme (ETS) will probably further raise per 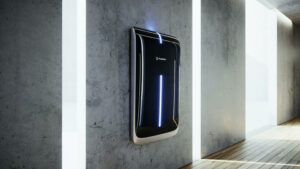 mit prices (which are already at record-high levels) and therefore make coal-based energy highly unprofitable. Second, Czechia is slowly displacing energy from coal with solar, natural gas and wind resources. According to the European Commission, renewables should account for 23% of the energy mix in the country by 2030, but in 2020, Czechia had barely reached 15.5%.

Nuclear energy will play a significant role in Czechia in the future, now providing more than 40% of electricity in the country. State-owned ČEZ plans to launch a tender before the end of the year for a new unit at its Dukovany power plant. But it will not commence operation before 2030 and therefore will not contribute to the reduction of emissions in this decade.

According to the Ember think-tank, Czech plans for green energy are still one of the least ambitious in the EU. In 2030, coal could still account for at least a third of total electricity production. The current Czech government plans to add very limited wind and solar capacities and the country is expected to be well below the EU’s average for renewables in electricity even at the end of the decade. Czechia, along with Poland, Bulgaria and Germany, will therefore have the dirtiest electricity grid due to the high share of fossil fuels (coal in particular). The endangerment of Czech forests also poses a potential obstacle to achieving the 2030 target. A bark beetle outbreak is causing mass deforestation and turning green carbon absorbers into sources of emissions. Managing the outbreak will therefore be a critical task moving forward.

Prague’s approach to green issues and environmental protection may change after this year’s elections. The Pirates and Mayors – a progressive centrist political alliance currently in opposition – has been leading the polls for several months, while currently governing Hnutí ANO comes in only 2nd or 3rd, with almost the same amount of support like the “SPOLU” coalition (Civic democrats ODS, Christian democrats KDU-ČSL and TOP 09). Pirates and Mayors intend to phase out coal by 2033 at the latest, and promise more effective use of European money to speed up the transformation of the country’s energy mix, e.g., by building new pumped-storage hydro plants. The conservative coalition SPOLU wants to focus more on natural gas, nuclear energy and solar energy. Both coalitions promise support for electromobility and effective waste recycling and management. Whoever wins the October elections, will face the huge challenge of transforming the energy industry to be able to meet the EU “Fit for 55” plan.